Alright, this time it’s on the topic of art as a quest of looking for a missing object (MacGuffin!). You remember Moby Dick, the major achievement of this genere, you might know Pynchon’s V, which is most clever as you can’t really tell if the precious, saught-after V was an object, a person or even an idea.

The point is that it’s all auto-referencial art, these are works of art that speak about art itself. Artists create those fictional worlds to tell you about their own amazing investigations, not some real, lost objects. I mean it doesn’t concern just people looking for something but it presents the essence of art, meaning artistic search for the perfect work of art. The one that catches this magical ingredient to the fullest extend.

Auster leaned back on the sofa, smiled with a certain ironic pleasure, and lit a cigerette.

A little game of interpretation. The first guy is just in a state on inertia,  nothingness, the lack of things to do is simply obvious in that room. In plain sight, the man just leans back with no idea of what to do with his life, ad has not enough energy to get out of there.

The second one shows hope though. Partly so, because we can’t see much, except the smoke. Still we can imagine that here is a man with a plan, a man with some goals he is driven to pursue. Only in action, in being involved, we can lose the weight of self-consciuousnes and also lose the sense of time and one’s identity . Only then, we are able to forget the smile of ironic pleasure, that is worth nothing at all. Maybe it would allow you to be…

Happy. Just in my swim shorts, barefooted, wild-haired, in the red fire dark, singing, swigging wine, spitting, jumping, running—that’s the way to live. All alone and free in the soft sands of the beach by the sigh of the sea out there.

For what it’s worth it could be only one half of a pleasant life. The other half, or and why not? even more of it could look more like this: 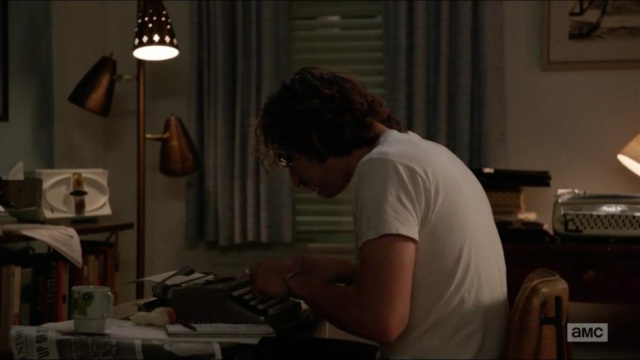 One thing for sure, when it comes to music, it sounds happier with you.